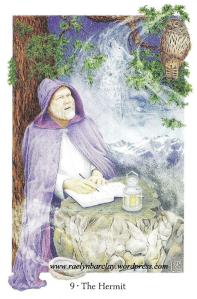 The Hermit, sacred solitude, is the ninth card in the Major Arcana. In a way, we’ve already met the Hermit as the Fool, s/he is simply older and wiser now.

It’s an earth card yet I see all the elements in harmony here. The setting feels peaceful to me. I love that he’s alone but not. The owl speaks of wisdom. The wolf speaks of a deep bond to family/friends. He appears reflective, or meditative, as though he’s taking stock of his life. The wispiness of some of the features in this card make me think of dreams, ideas, memories. And he’s writing in a book — Hello! Can we writers relate, or what?

The spirit is crying out for sacred solitude, a time to focus on life and spirituality, refill the well.

Shadow (upside down or reverse) Reading:

Beware too much isolation can lead to loneliness.

How about a magical world? Or a dreamworld? Maybe a cloak of invisibility or some other ceremonial clothing that imbues the wearer with power. Perhaps your story focuses on a worn down caregiver in need of a break mentally, physically, spiritually. Or a retelling of Diogenes, who lived by example, the philosophy of cynicism. And there’s the obvious Merlin the Magician connection just waiting for your muse to strike.

What about the number nine? Pregnancy? According to Kenner, nine symbolizes selflessness, compassion, universality, humanitarianism, and spirituality…all good things to explore.

The Hermit retreats from others to replenish his soul in solitude.

An archetype found frequently in dreams, myths, and stories is the Mentor [Wise-Man], usually a positive figure who aids or trains the hero. ~The Writers Journey

The personality enneagram, a nine-pointed array of personality types, might also be a useful reference for character building.

The Hermit is E9: Mediator, Peacemaker, and/or Preservatioinist

E9 people are instinctive, spontaneous, and intuitive. Their “gut” feeling is the center of their awareness. They are often direct or territorial. They are concerned with power, ruled by aggression, and may be troubled by self-doubt or self-blame.

Additionally, look up one of the Earth signs (Taurus, Virgo, Capricorn) for personality traits.

In many ways, the Hermit has a lot in common with writers. In fact, writers usually are hermits. ~Tarot for Writers

16 thoughts on “Meet the Cards: The Hermit”