It’s my great pleasure to have Angela Wallace here today! I can’t remember how I came across her blog but I’m so glad I did.

Let’s start with something fun. If you could have a quiet dinner with any writer, living or dead, who would you choose?

Hm, that’s a tough one. I think I’d actually like to have a chat with William Butler Yeats, the Irish poet. We don’t really have anything in common, but he was my favorite to read in college.

Earth Tones is the third book and I’m curious about the rules you created for the Elemental Magic world. Was it more of a discovery process or did you work out the boundaries before ever writing a word?

It was a little of both. I started off writing the first book knowing what I wanted, but once I started the second and expanded a little, I had to work out some things. It didn’t get me into a corner exactly, but there have been a few times where I’ve wondered if I should regret something established in the first book.

What is your favorite line or moment from Earth Tones?

Hm, I think it might be the trip out to Hubbard Glacier. It’s a pretty mundane scene, Nita and Keenan on a date, but the natural wonder of the glacier enchants me, along with the sweet normalcy before the supernatural storm.

Aww 🙂 What was the most surprising thing you learned during Earth Tones?

Not so much surprising as disturbing, but I did research on pathogens, how they worked, various symptoms, etc. And unfortunately one website on fungus had pictures of what infections can do to the human body. Let’s just say, too much information.

Grew up with a RN for a mother so I can imagine! Some of her text books were NOT for the general public, LOL. What piece of mythology did you use this time?

Since Nita is Native American, I wanted to play with a Native American tradition. I also knew I wanted it to be some kind of cat. Thus, I found the mishupishu, or underwater panther. I used a lot from the legend, such as its scales, spiked tail, and horns, though took a little creative liberty modifying them.

I’ve got to say I loved the idea of an underwater panther, especially with Keenan being a water elemental. If you could be an elemental, which one would you choose and why?

Earth. I’ve developed a love of having certain plants in my room, but they always die. In fact, my like sixth orchid just bit the dust. If I had earth magic, problem solved.

What is your best or favorite setting for writing? Time?

I would love to be productive in the morning or afternoon, but it seems evening is when my brain likes to work. Between 8 and 11pm, which unfortunately conflicts with an early work schedule the following morning. I always write at my desk, but my day job has been so busy lately, I’ve taken to writing in a notebook when on the go.

What’s your favorite stage when producing a book?

Editing. I’m a perfectionist, so the first draft is very frustrating to get through. Once I’m able to slow down and start putting some coherence and polish on, I feel better.

Interesting, I have to say I love the first draft because I send that inner editor on a cruise…hmm, maybe to the Hubbard Glacier next. Are there are any fun scenes that didn’t end up in the final draft?

There was this cute scene I wanted to use, but it just didn’t fit anywhere in the story. Nita and Keenan are leaving the house when they find a moose on the porch. I learned that this is a very dangerous situation and that people are actually trapped in their homes until the moose decides to leave on its own. Now, Nita could just tell the moose to get lost with her earth magic, but instead she says they’ll have to put their plans on hold, and with a suggestive smile, hints that they can figure out something else to fill their time with.

Oh yeah, that can be a very sticky situation. I haven’t personally experienced it but a couple cousins have.

We got to see Aileen in the first two Elemental Magic books; will Nita be returning for number four?

Yes. Aileen sort of set the precedent for a protagonist to get two books. I already have some ideas churning.

If your book were made into a movie, who do you picture playing each character?

I’m actually not so good with actors’ names and stuff. I could tell you the Native American police officer guest star in Season 4 of In Plain Sight would be good for Nita, lol. But Keenan has remained elusive. If any readers have suggestions, I’d love to hear them.

What say you, dear blog visitors, have you read Earth Tones? Share your suggestions in the comments.

Everyone seems to complain when their favorite book is made into a movie or mini series. What is your favorite movie based on a book?

I actually love comparing books with their movie adaptations. Even as a kid, I sat down to watch the Wizard of Oz with the book open in my lap. While I agree some movies or mini series don’t do the book justice, I loved the Lord of the Rings movies.

Since we’re all readers at heart, let’s talk books. What was your favorite childhood, I’m thinking middle school or younger, book?

Tamora Pierce’s quartet series, particularly The Immortals. The young protagonists always possessed a special and unique form of magic, and the quartets followed them growing up.

I don’t think I’ve ever hear of Tamora Pierce. I’ll definitely have to check that out. We all have favorite books, ones we nag our friends to read, buy our loved ones as gifts, and, of course, the books we read over and over again. What books have you read more than twice?

When I was in elementary school, I read the Baby Sitter’s Club, its spin-off the Little Sister series, and the Animorph series about three times each. But I wouldn’t recommend those now, LOL. Actually, my all-time favorite book, the one I’d want on a desert island, is a nonfiction book by A. W. Tozer: The Pursuit of God. I read that book over and over.

What do you think readers would be shocked to discover about you?

Hm… Okay, so I write about elementals, and Earth Tones takes place in Alaska: lots of wildlife. Now, I do love and appreciate nature—as long as there’s a sealed glass window between us. Or a camera lens. I love looking at nature, but I really, really don’t like to be in it.

LOL, no camping for you, eh? This is a bit of an extension of the last question — What’s a unique hobby of yours?

I like to draw My Little Ponies. Sometimes I even create custom designs to go with books. And on November 4th, you can see the Earth Tones pony I designed revealed on Rebecca Enzor’s blog!

With my new, healthy diet, the only dessert I can make, and I make it often, is almond cookies with chocolate and peanut butter chips.

Oh, that does sound good…for those who like chocolate and peanut butter, LOL. The wee beasties and That Man would be all over it 😀

We talk about the tarot quite a bit here on the blog. If you were a tarot card which would you be? Or which card do you feel represents you best?

Ok, I kind of cheated by taking one of those personality tests so it could tell me which one represents me best, and I scored as The High Priestess. The subconscious and conscious mind always whirring, devoted to knowledge but still recognizing that God leaves mystery in the world. That works. 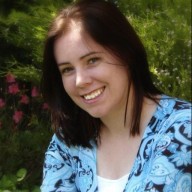 Angela Wallace loves gun-toting good boys and could have been a cop in another life except for the unfortunate condition of real blood making her queasy. Good thing writing gun and sword fights isn’t a problem. In her books you’ll find the power of love, magic, and redemption.

Nita Young doesn’t know if she has a future with college sweetheart Keenan Donovan—two star-crossed lovers of opposing elements—but she invites him up to Alaska to see if Earth and Water can rekindle their old flame.

When a series of wild animal attacks strike the inhabitants of Yakutat, Nita has to put her romantic plans on hold. Mangled bodies are turning up, and a mysterious black panther has been spotted in the woods. Fur, scales, and a venomous bite suggest the cat is supernatural in origin—and evidence indicates that someone not only summoned it, but is using it to target those Nita cares about. It’s the perfect murder weapon: no fingerprints, no evidence. And in a town this small, the killer is someone she knows.

Nita’s strength will be put to the test as she faces losing her friends, her town, and the man she loves.

12 thoughts on “An Interview with Angela Wallace”