Welcome to my series of Using Tarot in Writing based on Jenna Reynolds’ Tarot spreads. If you’re just joining the series, you may want to read the part one Introduction before continuing with this installment.

deck for this exercise and it switches out the elements between swords and wands. As I’m just brainstorming I’m not going to focus on the elements right now. I’m also doing this real time. I shuffled the deck, cut it, dealt it, and this is what I ended up with. 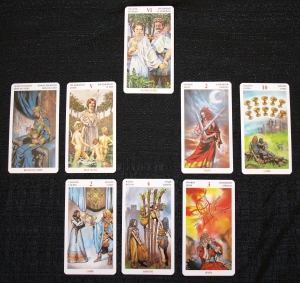 Let’s start with the lead character’s Goal, Stakes, and Obstacles — the bottom half of the spread.

Based on the first card on the top half of the spread, I’m going to say my lead is a woman and I’ve named her Regina (from the bottom of the card) Thorn (a play on throne).

Regina is happy in her career as a guidance counselor and per her ten year plan she’s now ready to take the plunge into marriage.  She’s known she’d marry Darin Knight for years because they’ve been dating off and mostly on since college.

Regina is so sure she’ll marry Darin that wedding preparations are already underway.  Everyone knows about the wedding except the groom and Regina will never live up to it if he turns her down.

A funny thing happened on the way to the wedding…Regina fell in love with someone else.

So, a little GMC *(Goal, Motivation, and Conflict) for Regina:

School guidance counselor, Regina Thorn, wants to marry her college sweetheart because both their careers are established and it’s time, but on the way to the alter Regina meets and fall in love with another man.

Not the strongest but we’re just brainstorming here.  Still plenty of time to add, change, etc.

Now, let’s look at the top part of the spread.

Regina is at work, she and Darin are in one of their “off again” periods, and she’s pensive.  How can she win him back?

Regina volunteers at the community center where Darin teaches swimming every weekend but Darin resists her charms.

Just as Darin seems to be coming around to Regina’s way of thinking, she meets therapist, Keith Painter.  Keith fulfills holes she didn’t know she had.

Or maybe, Regina starts going out with Keith to make Darin jealous.

Both men want her, she wants both men, but she can’t have both and the two men are pulling her apart.

Or maybe, making Darin jealous backfires and he walks out of Regina’s life.

Regina’s choice was hard won but she got her man and the family she dreamt about.  (And no I’m not saying which one, LOL)

And all of that gets me thinking about the antagonist in this story.

Astronomer, Darin Knight, wants to keep the friends with benefits relationship with Regina as is because he’s still not ready for marriage but his college words are coming back to haunt him, “Let’s give it ten years, get our careers established first, then we’ll get married.”  Time has run out.

Shy occupational therapist, Keith Painter, has admired Regina from afar and wants to show her all men aren’t players because he’s watched Regina and Darin for months, knows Darin is just using Regina, but Darin fights for Regina when he’s threatened by Keith.

No worries if this exercise sparks an idea or two for you — I have no plans to write this one. Besides, the story you write from this spread would be entirely different from mine.

There’s been some interest in a Q&A and/or Tarot 101 post. What I’ll do is gather up all the questions y’all note in the comments on any of the Tarot posts and write up a post at the end of the series. Thank you for the interest and support of this series.

19 thoughts on “Tarot: Plotting and Brainstorming”